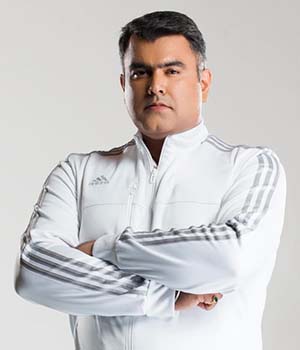 I had a dream to take Indian shooting to unprecedented heights. Out of that dream was born Gagan Narang Sports Promotion Foundation and Gun for Glory. Having seen the sports at its highest levels for 14 years, I realised that it needed a shot in the arm at the grassroots. There was a need to reach out to the budding athletes. All through my career I have felt how support at right junctures transforms careers and I wanted to do just that.

I would have never have managed to pull off this project without the support of like minded philanthropic individuals, who in their own understated manner, have nurtured the foundation and the academy from the day we began. Today it hosts 350+ national and 108 international medallists.

After living my dream in London, my conviction of giving back to the system became stronger. I wanted to make GFG a wider and more accessible programme that exceeds perhaps even my own imagination.

My team at Gagan Narang Sports Promotion Foundation with my personal attention, will ensure that we do all we can to produce Olympic Champions and have at least have one GFG trained shooter within top 3 of ISSF World Rankings We have put our best foot forward in supporting 4 Olympians. The effort, in these few years, has been hugely satisfying. Now, we need support, from like minded individuals, institutions and organisations to take Indian Shooting to the next level.
GNSPF have simultaneously started with two programme named Project Seed & Project Leap which is focusing at grassroots and elite level.

My dream was to enable these kids with the latest technologies, the ones that I did not get while growing up. If one gets the best training, the best scores in the competition are not very far.”

I wish with little help from friends like you we are able to nurture the dream called ‘GUN FOR GLORY’.

I hope that you will explore our website to learn about the shooters themselves and the programs referred to above, and many others initiated by GNSPF.